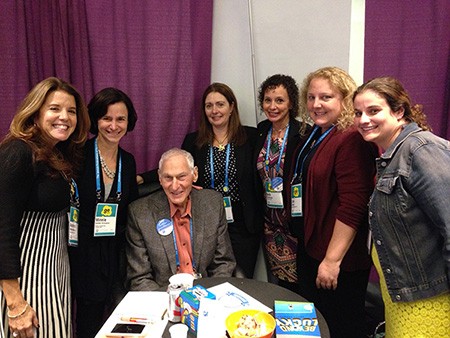 Every November, the Jewish Federations of North America gathers for their annual conference, known as the General Assembly (GA). At this year’s GA, over 3,000 Jewish leaders met for an inspirational 2-1/2 day conference, and Rockland sent its largest delegation. Diane Sloyer, Andrea Weinberger, Nat Wasserstein, Lisa Green and Beth Weiss-Dunn had the opportunity to network, learn and share with colleagues and volunteers from all over North America and Israel. In addition, this year’s GA had over 500 young adults below age 30 engaging in meaningful dialogue about the challenges, thoughts and aspirations for the next generation of our global Jewish community.

We all connect to our Judaism differently, and the opening plenary allowed us to hear the Jewish journeys of the Honorable Justice Rosalie Silberman Abella of the Supreme Court of Canada, Actress Debra Messing, and David Gregory, former moderator of NBC’s Meet the Press.

Born in a displaced persons camp, Rosalie Abella’s family made its way to Canada. Her father (who had been a successful lawyer in Germany) could not practice law in Canada and sold insurance to support his family. Rosalie’s dream of making her father proud and serving her country became a reality and her Jewish roots remain strong as she is the first Jew on Canada’s Supreme Court.  Debra Messing, the only Jew in her high school, was often ridiculed for taking off for the holidays. She attended Brandeis University and for the first time felt free to be a Jew.  Hollywood, while very Jewish, has presented challenges but Debra’s connection to social justice and social action is stronger for it.

And then David Gregory: born to a Jewish father, he is deeply committed to Jewish learning. David’s father died two days before the GA and through tears David shared his message of L’or V’dor – from generation to generation – as he looked forward to celebrating his son’s bar mitzvah on the Shabbat following the GA (Parshat Toldot).

Harold Gernsbacher, the incoming National Campaign Chair from Texas, shared his motivation, one that we can all learn from.  “The more I have, the more I give and the more I give, the more I have.”  As he takes the campaign reigns of JFNA – the largest global Jewish philanthropy – he and we have a lot to be proud of.  Raising over a billion dollars annually and another billion plus in endowment and planned giving, Federation can and does make a meaningful impact. We can accomplish so much when we work together.

The closing plenary on Tuesday featured Israeli Prime Minister Benjamin Netanyahu. Netanyahu began his speech by saying “we must always remember a simple truth – no matter the disagreements: Israel has no better friend than America.” He also stated that he will ensure the “Kotel is a source of unity for our people and not a source for division.” Netanyahu asserted that all Jews – Reform, Conservative and Orthodox – will feel at home in Israel.

Netanyahu told an enthusiastic audience that “Israel is judged by a different standard than any other country in the world: A word that begins with an ‘a’ and ends with an ‘m’ (alluding to the word anti-Semitism). We must fight the lies against Israel and we will do that by telling the truth.”

To watch the plenaries and to see the full schedule of all that the GA had to offer, visit www.generalassembly.org and maybe next year, consider joining us!