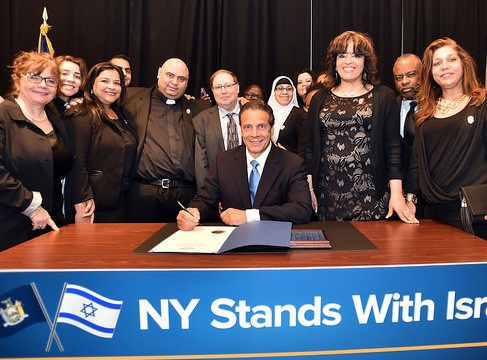 On December 19, Ohio became the 15th state in America to pass an anti-BDS bill, prohibiting state agencies from contracting with companies involved in boycotting or disinvesting from Israel. Other U.S. states are expected to pass similar legislation in early 2017, including Nevada and Texas.

In June of 2016, New York Governor Andrew Cuomo signed an executive order directing state agencies to stop doing business with institutions and companies that support the BDS movement. However, legislation that includes a specific list of ineligible vendors has yet to be formally adopted by the state.

New Jersey passed a bill also in June of last year, prohibiting pension fund investment in pro-boycott companies. In addition, the town councils of Englewood, Norwood and Livingston, New Jersey passed their own resolutions condemning efforts to delegitimize the State of Israel.

Soon, Rockland County will be adding its voice to the growing efforts denouncing the anti-Semitic BDS movement, as County Legislature Chairman Alden Wolfe plans to introduce legislation at the local level that mirrors the forthcoming New York State legislation.

“What I want to do is to make sure Rockland County enacts the same legislation as the state, with the same list of companies with which we will not do business,” says Wolfe, who adds that, while the resolutions passed by the New Jersey townships express powerful sentiments, “I want to pass something more substantive in Rockland.”

With a new session starting in Albany this month, Wolfe believes that a formal list of vendors who engage in BDS activities will be introduced soon. “By passing the same legislation in Rockland, we will be sending a very powerful message about anti-Israel activity,” says Wolfe.