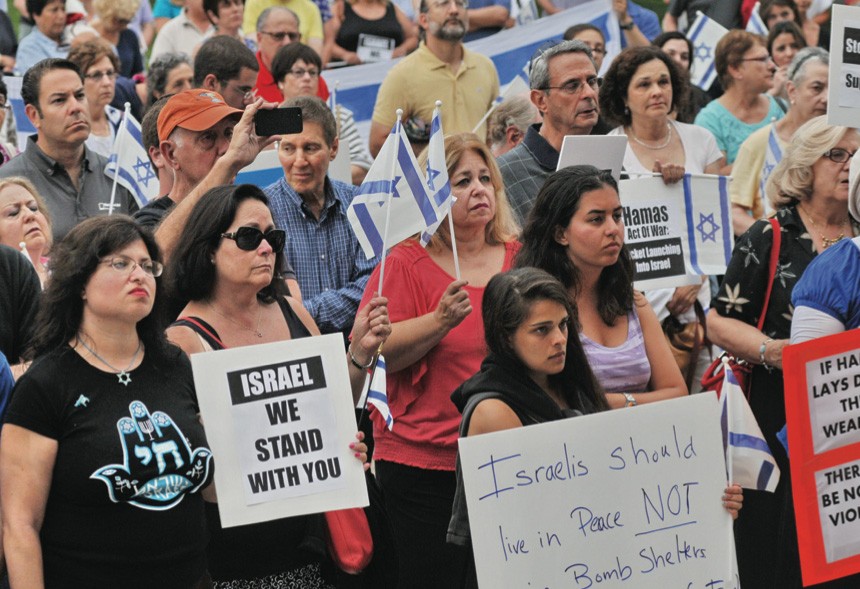 Through prayer services, memorials, rallies and missions, we stand with the Jewish State

The June 12 kidnapping and murder of three Israeli teens, along with the death of a Palestinian teen killed in revenge, sparked what has been a long summer in Israel of rockets, sirens and fighting with Hamas terrorists. Throughout it all, our community remained steadfast in its support of Israel.

On the eighteenth of June, Rockland Federation held a vigil for the three Israeli teens – Naftali Frenkel, Gilad Shaar and Eyal Yifrach – who disappeared while hitchhiking home from school. On July 1, Federation held a memorial for the boys, and both events were covered by News 12 Hudson Valley and The Journal News.

“We wanted to gather to express our shock and grief,” RJI Director Cantor Barry Kanarek told a News 12 reporter after the memorial. “And we want to let the families of the victims, and all of Israel know that we stand united with them.”

In addition, Rockland Federation held a solidarity rally for Israel on July 10. Hundreds gathered at the Rockland County Courthouse in New City waving Israeli flags, holding signs and wearing blue and white in support of Israel. At the time Israel was just beginning to defend herself against rockets being launched with increasing frequency from Gaza.

Rockland Federation co-president Rob Grosser spoke at the rally. “Together we stand strong as a united community in support of Israel and her right to defend herself using whatever appropriate means are necessary to ensure the safety of the state, and safety of the citizens,” Grosser said.

A second solidarity gathering was held at the Rockland Jewish Community Campus on August 7. Well-known journalist and guest speaker Linda Scherzer told the audience the she was “ashamed at the way hundreds of journalists in Gaza have been complicit, serving the aims of Hamas.”

In July, board members Andrea Weinberger and Paulette Viana, along with Federation staff members Diane Sloyer and Lara Epstein took part in a leadership mission to Israel, hosted by Jewish Federations of North America. On August 17, Federation’s adult education director Roberta Seitzman took another group to Israel to participate in a JFNA solidarity mission. Their presence demonstrates the high level of support that Rockland shares with our homeland.

“Stop The Sirens,” Federation’s Israel relief campaign began on July 10, the night of the rally in New City. Since then Rockland Federation has raised over $115,000 for Israel.

At press time, the fighting continues. Hamas violated another cease-fire agreement by sending a barrage of rockets into Israel on August 20. We pray for a lasting and peaceful resolution to the conflict.