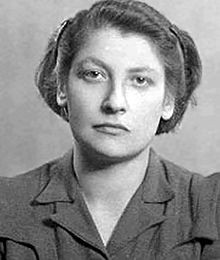 Adult education students enrolled in Federation's "Women of Valor" class are learning about Zivia Lubetkin this month. Led by instructor Leslie Goldress, the course is bringing to life the heroic Zivia, a young Polish woman who amazed the world with the bravery she exhibited during the Holocaust.

As a teenager, Zivia had aspirations of settling in Palestine after joining the He-Halutz branch of a Zionist movement. She helped to establish escape routes to Palestine during the war years. In her travels around Poland she met Frumka Plotnitzka and Leah Perilstein. These three women helped forge part of the resistance in the Warsaw ghetto. They carried news, smuggled food, weapons and money, along with warnings of approaching danger.

Among her accomplishments during the war, Zivia managed to feed 300-400 hungry Jews daily through a soup kitchen she established in the ghetto. At a time when the youthful groups were fighting to stay alive, she filled lightbulbs with sulfur to use as bombs.  She set fire to empty stores so that the Germans could not make use of them.

With a unit of 40 men and women armed with four hand grenades, four pistols and some iron pipes, sticks and the sulfur bombs they had invented, they defeated a group of German soldiers. Zivia survived the war and settled in Israel with her husband Yitzhak Zukerman, another freedom fighter from the ghetto, where they raised their family.

Later, when explaining her life’s work, Zivia said, “There were people we had to defend. We could not commit suicide. The inner logic of youthful idealism compelled us to continue our efforts.”