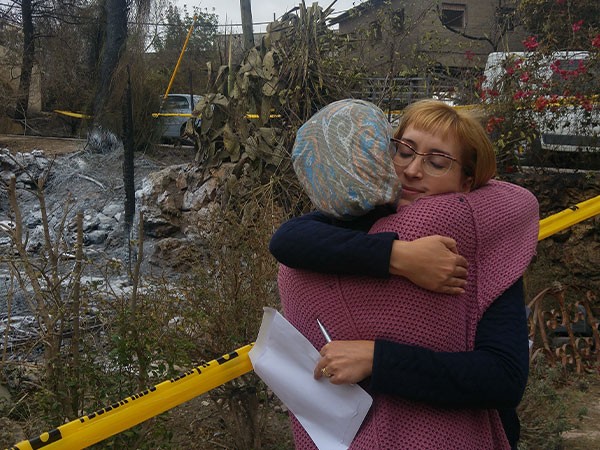 Israel battled the biggest forest fire in its history in November of 2016, and Federation donors sent hundreds of thousands of dollars in aid to help Israelis rebuild their lives after the fires. Below is a story from one fire victim who received assistance from Federation-supported Jewish Agency For Israel (JAFI).

Oshra Levy was relieved. Her husband’s open heart surgery had gone well. After four weeks in the hospital, he was starting to regain his strength at their quiet home in Beit Meir, in the hills just west of Jerusalem.

Their peace didn’t last long. In the middle of the night, Oshra woke up to loud banging and evacuation orders shouted over a megaphone. When she opened the window, smoke and sparks from a raging fire flew up and engulfed their bedroom.

Despite the terrifying darkness and choking smoke, Oshra woke her husband as gently as possible, then her son. They fled the house quickly, with nothing but the clothes on their backs and a bag of life-saving medication.

When the blaze was finally extinguished, they returned to a ruined home. The front hall was completely charred, and a firefighter’s axe had chopped through front door. Only then did the Levys realize their fortune: If Oshra hadn’t heard that megaphone, they would not have made it out alive.

Their son has no school to go to now. It burned down, along with much of the town. Smoke hangs in the air amid ruins of destroyed homes. And her husband has been in and out of the hospital since that fateful night.

It will take a while to rebuild their home—and their lives. Meanwhile, a grant from Federation partner The Jewish Agency for Israel is helping the Levys—and other families in Beit Meir who have lost everything—slowly get back on their feet.

Oshra is optimistic, and deeply thankful. Fighting back tears, she says, “Your help is truly needed. This is a blessing.”