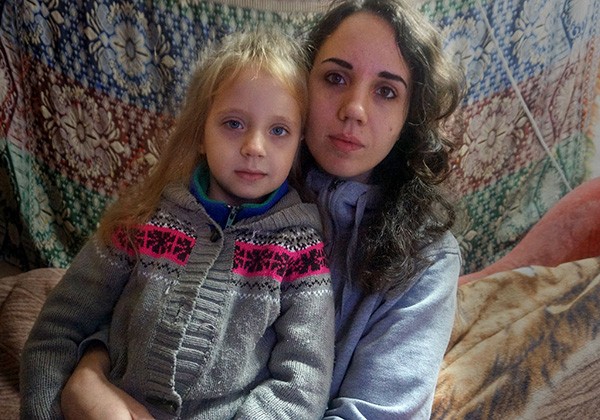 Reprinted with permission from the American Jewish Joint Distribution Committee (JDC), Federation's overseas partner. JDC's work is made possible through the generosity of Federation's donors.

For little Valeriya Sarabun, winter is the hardest time of all.

The six-year-old, who suffers from frequent colds and other medical complications, lives with her mother and grandmother in a dilapidated shared apartment in the Black Sea port city of Odessa.

Each night, she and her mother Marianna — a 28-year-old unemployed high school graduate who fled domestic abuse and the war in eastern Ukraine — share a small sofa in the corner, under a shabby wall insulated by a piece of old carpet. Plastic bags full of clothes and shoes surround their makeshift bedroom.

Marianna’s stepfather and brother live in the same room, sleeping behind an old bookcase.

If not for the assistance of the Jewish Family Service of Hesed Shaarey Tzion, JDC’s social welfare center in Odessa, it’s hard to imagine how the mother-and-daughter pair would get by.

From Eastern Europe to Central Asia, JDC’s work in preparing the most vulnerable Jews for winter is one of its signature humanitarian aid programs throughout the former Soviet Union.

“In different parts of the FSU, winter assistance remains relevant and sometimes even critical for survival,” said Yulia Shusterman, a JDC staff member in the region.

During the winter, JDC gives Valeriya and Marianna winter boots and coal for heating. Throughout the year, JDC also assists the family with food, medical help, and school supplies.

After JDC helped her regain her footing, Marianna went back to school to become a nurse’s assistant — education provided and paid for by the Jewish Family Service. She finally can begin to imagine a bright future for herself and her daughter.

“Our family life has not been easy. The situation in Ukraine has now made it even more difficult,” Marianna said. “Fortunately, Hesed and the Jewish community make sure I’m not alone — even under these circumstances.”

About four and a half hours northwest in Bălți — Moldova’s third-largest city with a population of about 100,000 — Tatyana Skorohod lives alone in a studio apartment she’s been unable to afford to repair for over 10 years.

Living on a monthly pension of $35 with a monthly utility bill of $53, Tatyana relies on winter relief support from JDC to avoid eviction. JDC also helps her pay for food and medications.

“In these difficult times, especially in winter, I am so grateful to JDC and the Hesed for the assistance they provide,” she said. “Without it, I wouldn’t be able to survive.”

A sociable, friendly woman with a great sense of humor, Tatyana also volunteers at the JDC Hesed’s Day Center program in Bălți, celebrates Shabbat with the city’s Jewish and participates in a program called “Peer to Peer” that takes her to the apartment of another Hesed client, a bedridden woman in intense pain.

“I don’t only visit her when the schedule tells me to. We’ve become close friends,” Tatyana said. “Since I began to participate this project, my life has new meaning. Now I know my purpose is to give assistance to everyone who needs it.”