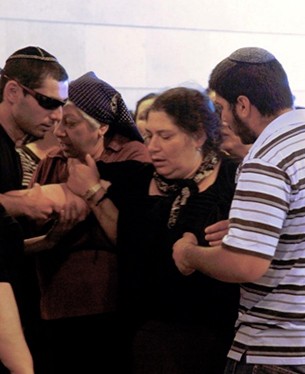 People who make aliyah to Israel often leave their network of family and friends behind for the hope of a better life. But when tragedy rocks the life of a new Israeli immigrant, he or she may find themselves alone, with no one to turn to for help.

There is an agency in Israel – SELAH – that works with just these types of immigrants facing crises. SELAH is a safety net for newcomers to Israel who lack the support system of family and friends and has helped more than 18,000 people since its founding in 1993. 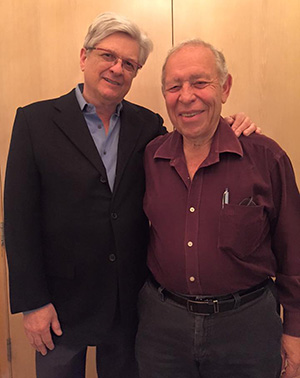 Attendees at a Federation Leadership Briefing on February 29 learned first-hand about the work of SELAH from Micha Feldmann, the agency’s director and friend of Federation Campaign Chair and Past President Bob Silverman (right). The Leadership Briefing was well attended at the home Gary and Marsha Forman of New City.

At the briefing, Feldmann recounted his emotional stories of rescuing Ethiopian Jews throughout the 1980s and during Operation Solomon in 1991. As one of the chief architects of that covert Israeli operation, Mischa helped bring 14,310 Jews out of war-torn Addis Ababa to Israel in a single weekend.

Integration into Israeli society wasn’t easy for the Ethiopians. According to Feldmann, 98% came from villages with no electricity or running water, their knowledge of Hebrew was extremely limited and 70% of the adults were illiterate in their own language. Feldmann continued to work with the Ethiopians through his role with Federation-supported Jewish Agency for Israel (JAFI) for many years before joining SELAH, which helps those who immigrate to Israel from France, Ukraine, South Africa, Ethiopia and many other countries worldwide.

Some of the stories Feldmann shared at the Leadership Briefing were tragic. He spoke of how he helped a new immigrant from Russia after her two daughters were killed by a suicide bomber at a Tel Aviv disco in 2001: “When I heard about the explosion on television I immediately drove to the disco, and then to a nearby hospital. There I met Alea, and together we went to one hospital after another, searching for her daughters. Tragically, we found the girls at a morgue. There was a double funeral that Sunday and a full house for shiva, but soon after that the family was alone again. I returned to visit not long after, enjoying the grandmother’s kreplach and I continue to call the family a few times a year.”

Another story that Feldmann shared centered on a twenty-year-old Ethiopian girl who was single-handedly raising her orphaned siblings. “Older kids raising younger siblings is a strange concept for an Israeli social worker, so I had to fight to keep the children from being split up into foster homes,” he said. Feldmann was also able to provide the young head-of-household with financial support so she could go to school. “Two-and-a-half years later, she had her high-school diploma and a good job,” said Feldmann.

When he comes home from work, Feldmann often tells his wife that he “enjoyed” his day. Although his hours on the job are filled with crises, hospital visits, funerals and tough problems to solve, Feldmann says, “I look in the eyes of these people and when I see what a difference I’ve made in their lives, I can enjoy it.”

Micha Feldmann is one of seven SELAH staff members in Tel Aviv who rely on the assistance of some 200 volunteers and financial support from Federation and other donors. If you would like to make a gift to Federation that is earmarked for SELAH, please call Campaign Associate Beth Weiss-Dunn at 845-362-4200, or donate to Federation here.