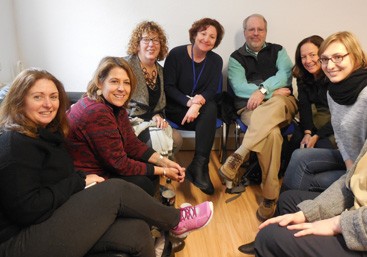 By Diane Sloyer, Executive Director
After landing in Berlin on February 19, I boarded a bus and realized for the first time that I was part of a Federation mission – without a sign in the window of the bus that would identify us as a Jewish group. I was in Germany roughly 70 years after unspeakable atrocities were inflicted upon our people there, and we were told we should not overtly identify as Jews. Given that I was invited to travel to Germany, and knowing about the growing terrorism directed at Jews and others throughout Europe, I momentarily questioned my decision to join this mission.

Berlin is a fascinating city and despite some initial unease, I do not regret my decision to travel there. We were on the ground for four days as part of a familiarization trip sponsored by Da’at Travel, where we had the unique opportunity to experience Jewish Berlin and gain an understanding of the historic, horrific, tragic and yet encouraging and hopeful Jewish life in Berlin.

Berlin is the fastest-growing Jewish city in the world because of the influx of Russian Jews at the end of the Cold War. In fact, a majority of the Berlin Jewish community is Russian, and then there are the Israelis too. After World War II, Germany was generous with reparations and after the collapse of the Berlin Wall, Berlin became a very chic, cosmopolitan and open city. These factors help explain the attraction and growth in the number of Jews moving to Berlin.

In the center of the city is the “Memorial of the Murdered Jews of Europe,” constructed and maintained by the German government. It’s a constant reminder of not only the atrocities that took place but that most German citizens did nothing to intervene. There are memorials throughout the city, all geared toward keeping the memory of the evil of the Nazi movement part of everyday conversation. The Jewish Museum, which focuses on Jewish German life before, during and after the Holocaust is yet another example of Germany’s commitment to illuminate history. We visited the Berlin neighborhood of Gruenwald where track 17 stands as a memorial to the 117 transports that took 35,000 Jews to concentration and work camps.

Additional highlights of our Jewish Journey through Berlin can be seen on the Federation Facebook page, along with some photographs. But for me, the highlight was Shabbat. We were invited to the home of Rabbi Josh Spinner, the CEO of the Ronald Lauder Foundation. A building complex that once housed Jewish life had survived the war and is now home to a Lauder elementary school, a Liberal synagogue, an Orthodox Minyan and administrative offices. Rabbi Spinner is a North American Jew. After graduating Columbia University he spent two years in Belarus and was then recruited by Mr. Lauder. His proficiency in Russian – and his European wife – made Germany a perfect choice in which to be based and work for the Lauder Foundation.

When we arrived at his home to light Shabbat candles, there were security guards outside. We were on the guest list, so our bags were inspected and we were buzzed in. When we arrived at the synagogue, we went through another security check and were allowed to enter.

As we began the Kabbalat Shabbat prayer service, it hit me. I am in Germany and I am a Jew and I’m praying in a synagogue. I am praising God, and I can praise God because despite the tragedy of the Shoah, we the Jewish people survived to do so. We welcomed the Shabbat Queen with Lecha Dodi, standing in Germany because we are a people who fight and will continue to fight. Anti-Semitism did not defeat us before and we will not let it defeat us now.

As the Passover holiday approaches I look forward to being with friends and family and raising my glass of wine at the Passover table and reciting the words of V’hei She’amda – “In every generation, more than one nation has tried to destroy us, but God has saved us from all of them.” When we say that verse in 2015 (5767), the threat to Jews worldwide is sadly as serious as ever. For me, that verse is not just a statement of our faith in God. That prayer is also a call to action for us as individuals and as a community to make sure we are doing everything we can to insure the continuity of the Jewish people. I have no doubt that together, we will be successful!

On behalf of myself and the staff and lay leadership at the Jewish Federation of Rockland, I wish you and your family a Zissen (Sweet) Pesach.  — Diane 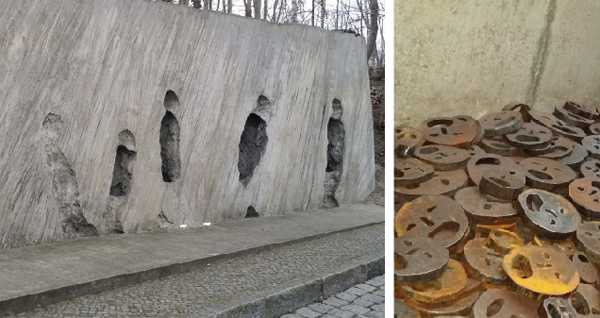 LEFT: Gleis 17 (Track 17) was the main deportation center for Berlin Jews during the Holocaust. It now has a memorial that was initiated by the Deutsche Bahn, the German national railway company, to commemorate the deportations undertaken by its predecessor, the Deutsche Reichsbahn. RIGHT: “Shalekhet” (Fallen Leaves) is an installation at the Jewish Museum Berlin. More than 10,000 open-mouthed faces coarsely cut from heavy, circular iron plates cover the floor, expressing the irretrievable loss of the Jews murdered in Europe.