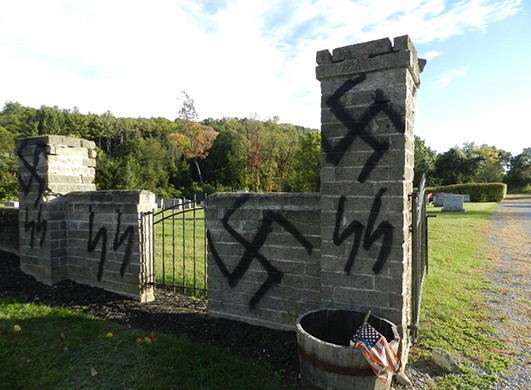 Swastikas and other anti-Semitic graffiti were maliciously spray-painted onto the entrance of Temple Beth Shalom's cemetery in the Town of Warwick on October 8. The heinous crime was discovered the next morning, just days before the start of Yom Kippur.

Steve Gold, Chair of Rockland Federation's Community Relations Council, attended a solidarity ceremony this past Sunday at the entrance to the cemetery. According to Gold it was a gathering of over 500 supporters and "a diverse crowd with lots of children and adults of all ages." Those who attended prayed, sang and painted over the offensive markings. "It was respectful and moving," said Gold. "I was warmed to see so many people from Orange and Rockland Counties present."

A statement on the Jewish Federation of Greater Orange County's website condemns the anti-Semitic act. "We support Temple Beth Shalom and urge the local authorities to label this a hate crime and to apprehend and prosecute the perpetrators to the full extent of the law," the website says.