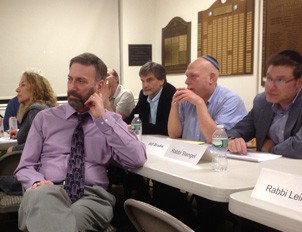 In mid-March of 2015, Dr. David Elcott and Stuart Himmelfarb of B3/The Baby Boomer Platform and the NYU Robert F. Wagner Graduate School of Public Service will deliver their final report on the Federation’s Jewish Rockland 2015 study. The report will include conclusions and recommendations based on two sets of surveys and convenings with Rockland County’s synagogue leadership.

Among the findings reported at the first two convenings are the following highlights:
•     The largest growing religious group in the United States are those with no affiliation- the “nones”
•     Synagogue membership in Rockland has decreased, mirroring national trends
•     “Membership”, “affiliation” and “community” are changing and, perhaps, becoming less relevant
•     The ways we communicate and connect have been revolutionized

This raised a number of questions for discussion, including the following:
•    Should synagogues move past a “fidelity framework” and get used to shorter-term connections?
•    If many current and former members connect volunteer activities to more universal goals and outcomes, how does this affect synagogue mission statements, programs, communications and priorities?
•     “Just Jewish” represents a growing share of the Jewish community, similar to “nones” nationwide. How does this affect our congregations?
•     Baby Boomer transitions are unprecedented, and resources and responses are not easily available; what role can the synagogue play?

The findings point to a need for change. As Stuart Himmelfarb said in a recent article on the Rockland Jewish community, “people are voting with their feet. What we hope is one of the outcomes of our study is that synagogues look a little more creatively and with a little more risk taking at what they do.”

As the final report becomes available, we will share it along with the results from the two convenings which are on our website here. For more information please e-mail Barry Kanarek, Director of the Rockland Jewish Initiative at bkanarek@jewishrockland.org.