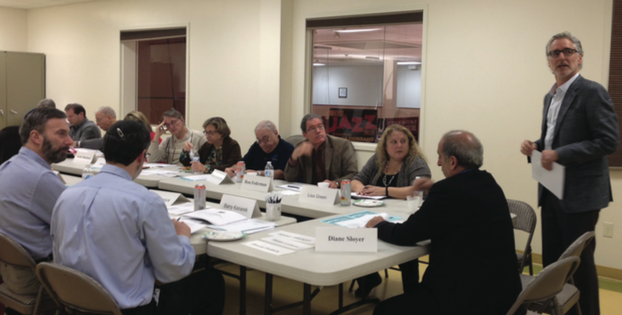 Members of the RJI Synagogue Leadership Council discuss the results of the first phase of research at a meeting on November 12.

The Rockland Jewish Initiative (RJI) recently launched Rockland’s first study of the county’s non-Orthodox Jewish community titled Jewish Rockland 2015: The Landscape of the Rockland County Board of Rabbis Community. RJI is a program of the Jewish Federation of Rockland and the study is being facilitated by Dr. David Elcott and Stuart Himmelfarb, both of B3/The Jewish Boomer Platform and the NYU Wagner School of Public Service.

The goal of the study is to better understand the past, present and future of synagogue life in Rockland County, and consider ways to engage or re-engage congregants. “We have information on general trends in the Jewish community from national and regional studies, but our congregations need to see the situation specifically in Rockland” said Cantor Barry Kanarek, Director of the Rockland Jewish Initiative. “Using information from the synagogues and by surveying members of the local Jewish community, we will create a series of workshops to benefit synagogues affiliated with the Rockland Board of Rabbis,” he continued.

The research began in early November with a survey of leadership at Rockland Board of Rabbis’ synagogues. The survey collected data and impressions on local membership trends, and the results were discussed at an initial convening of stakeholders on November 12.

On December 1, a second survey of attitudes and behaviors will be launched, to gather data from members of the Rockland community. These findings will be used to create new models of synagogue engagement at a second convening of the Synagogue Leadership Council on February 5.

The community is encouraged to participate in the online Jewish community survey. Take the survey