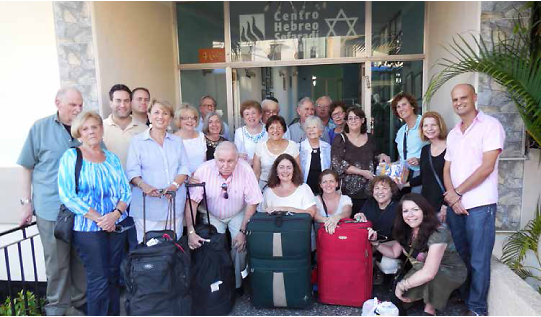 As I sit here looking out of my window at piles of snow, it’s hard to believe that just a short while ago 26 of us took part in a Jewish Federation of Rockland mission to connect with the Jewish community in Cuba.

Cuba is a place of contradictions. The warm smiles, cold drinks, vintage cars and smooth music are in many ways a facade that hides the real Cuba. In a country where there is little private enterprise and the government owns just about everything, citizens struggle simply to survive. Lawyers and doctors earn about the same as bus drivers and tour guides-about $20 a month! But it wasn’t always like this.

The Republic of Cuba was formed in 1902, which ushered in a wave of Jewish immigration from places like Turkey and the US. Some came to escape World War I, others for economic reasons. As is often the case, the Jewish community thrived and became an integral part of the social and economic fabric of the new Republic. At its height, there were ten synagogues in Havana alone. In 1959, the Cuban Revolution brought significant social and economic changes. Those who could afford it at the time left the country. For the Jewish community, only about 10% remained.

Today, there are approximately 1,200 Jews remaining in Cuba. Many are elderly, as younger families make aliyah. During the mission we visited three synagogues in Havana - one Ashkenazi, one Sephardic and one Orthodox. We also visited a synagogue in Santa Clara and an unofficial “satellite” in Cienfuegos. Outwardly different, at their core each provided a resource not only for Jewish life, but for survival itself. With everyone theoretically “equal” under communism, there’s very little anti-Semitism in Cuba. All Cubans receive a monthly allocation of food and supplies: 5 pounds of rice, 2 pounds of beef, some cooking oil, coffee, sugar, a little soap. Most can’t afford sufficient food to feed their families, however the relief provided by Rockland Federation and delivered through the Joint Distribution

Committee supplement the needs of the Jewish community. The orthodox synagogue in Havana operates the only Kosher butcher shop in the country (which after the revolution, was the only private business in the nation). One cow a month, plus some chickens, supplements the monthly allocation of food.

Much is said about the high standard of medical care in Cuba. What we learned is that although there’s a high level of expertise, what is often lacking are access to supplies and medications. Even simple items like a syringe or latex gloves are often in short supply. The Sephardic synagogue, along with the Patronado synagogue, maintains a pharmacy which makes medications available not only to the Jewish community, but to others who are in need. As a group, we brought with us several hundred pounds of medications, vitamins, toiletries and medical and dental supplies which will directly benefit those in need.

Maintaining religious traditions under communism is a challenge, although since the collapse of the Eastern Bloc in 1992, religion in Cuba is no longer legally “incompatible” with communism. In fact, several years ago Fidel Castro visited the Patronado synagogue in Havana during Chanukah, naturally drawn by the celebration of the “revolution of the Jews.” It’s imperfect, but when you’re struggling simply to get by, survival becomes more important than strict adherence to Halacha. The cubbies in the Orthodox synagogue that traditionally held tallit and tefillin now also serve as unofficial safe deposit boxes for members of the community. Ritual circumcision are performed in hospitals by physicians, and rarely within eight days of birth. The synagogue in Santa Clara holds Shabbat services every other week, with families from Cienfuegos driving an hour to get there. But as Jacob (the unofficial “caretaker” of tradition at the Orthodox shul) asked us, which is more important: to eat kosher, or simply to eat?

A moment of realization for me came during a visit to the synagogue in Santa Clara. David, the leader of that community was thrilled to have his “brothers and sisters” visit and his enthusiasm shone through the room. He shared his efforts to meet the needs of the 21 Jews in his community: maintaining the Jewish cemetery (founded in 1932), creating a Holocaust memorial and building relationships with non-Jews (in his words, “we should be making new friends; we have enough enemies already”). His goal is to maintain Jewish traditions and to keep them alive in imperfect conditions, one day at a time. While he was speaking, I couldn’t help but notice the eternal flame hanging above his head. It dawned on me that this man, along with all of the others in Cuba working and sacrificing to keep our traditions alive, were all eternal flames in their own right. For millennia, in nations around the world, our people have worked, lived, struggled, celebrated and died, yet still we endure. Eternal flames, all of us.