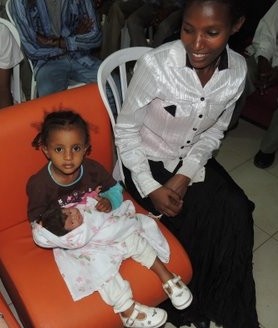 The Jewish Agency’s Director of Donor Relations and Missions, Rebecca Stern, recently wrote a heartfelt letter to Rockland resident Bob Silverman for his involvement with Ethiopian Jewry. Rebecca told Bob that he is proof that one person can make a real difference in the life of another.

In her letter to Bob, Rebecca writes, “Last week I escorted a group of young leaders from South America to the Mevasseret Absorption Center. One of the participants asked me, ‘Do you really think that ONE person can make a real difference in someone's life?’  That is when I had the opportunity to talk about you, your commitment, your passion, your story and how YOU - and your family - have had an impact on so many people.”

Rebecca told the group at the absorption center how Bob traveled to Ethiopia and recorded the journey of the olim (immigrants) through photographs, making copies for each family. For many of the olim, the photographs were the first they had ever seen, and the only record of their homeland that they could share with future generations. They were incredibly appreciative. Rebecca also told the crowd how Bob gave dolls to three young Ethiopian girls as they boarded the plane for Israel. Bob brought the dolls from the U.S. at the urging of his wife, Lois. Bob had the pleasure of seeing two of the girls on subsequent trips to Israel, both of whom were still holding tight to the dolls given to them by the Silvermans. Telling this to her tour group, Rebecca says she could see “the light in these young people’s eyes open!”

Rebecca’s letter to Bob concludes, “I also told them how your funding provided a summer camp experience for 51 children this past summer during Operation Protective Edge. Though I could have gone on, I stopped your story at that point because their tour guide was at his wits end - I made them late for Yad Vashem. Then, the participant Juan who asked the question said, ‘So it sounds like you DO believe that ONE person can really make a difference.’ I replied, ‘I have seen it with my own eyes. Yes I do believe that ONE person, like Bob or you, can and will make a difference.'”

The Jewish Federation of Rockland is proud to have such dedicated volunteers in our ranks. To find out how you can make an impact on an upcoming mission, please call Diane Sloyer, Executive Director, at 845-362-4200, ext. 133.