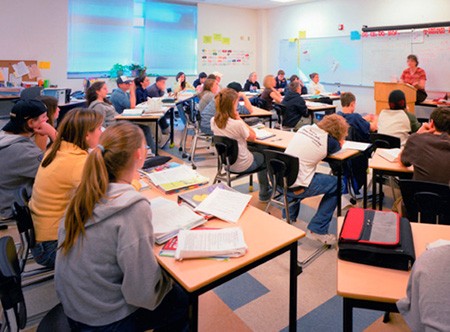 Cassie Blotner, a ninth-grade student at Clarkstown South High School felt “really uncomfortable” when she saw a video in Social Studies class that inappropriately portrayed Jews during the Roman Empire. Cassie told her parents about the video later that day and the school district and Federation got involved – showing that one person can truly make a difference.

“The video just wasn’t true. It described the Jewish religion as exclusive but I think we are inclusive,” Cassie said.  Cassie went on to note that she and many other Jewish teens participate in NFTY which is a “very inclusive” program. But the part that disturbed Cassie the most was when the video claimed that people who lived in the time of the Roman Empire felt that persecuted Jews "got what they deserved."

“That is not appropriate to show in a classroom,” said Cassie. “If kids see that in class they will believe it is true.” That night for homework, Cassie was supposed to write “Jews got what they deserved” in a comparison chart, but she refused to write those words.

That Cassie spoke  up – and  Federation responded – created  waves outside the Clarkstown community. It prompted Dr. James Montesano, Superintendent of the neighboring Nyack School District, to look into his schools’ use of instructional material. When Dr. Montesano became aware that two videos from the same vendor that misrepresented Judaism were made accessible to Nyack Middle School students, he took action as well, removing the videos and severing ties with the content producer. After meeting with Federation leadership, local Rabbis and representatives from the Anti-Defamation League, Dr. Montesano said he would continue to work with Federation and the other organizations “to ensure that our schools reflect the diversity and mutual respect that is a core value of our community.”

Over recent days, Federation’s Community Relations Council Chair Steve Gold has reached out to all other superintendents of Rockland County school districts, to offer Federation’s assistance with teaching Jewish history, inter-group relations and the broader issue of social tolerance in society. In addition, Federation President Andrea Weinberger and CEO Gary Siepser had a successful meeting on Feb. 25 with South Orangetown School District Superintendent Dr. Robert Pritchard, who also plans to meet with representatives from the Holocaust Museum & Center for Tolerance and Education. The Federation leadership team looks forward to opening dialogue with the other superintendents soon, and to become a resource to all Rockland school districts as they prepare curriculum on Judaism and relations between Jewish people and different groups.

According to Gary Siepser, “We are so proud of Cassie for speaking up about the issue. She demonstrated the power that one person has, regardless of their age, to make a difference and right a wrong. Cassie's actions enabled Federation to bring the community together and address an important issue."