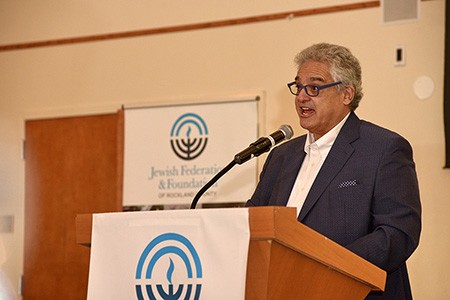 We’ve experienced a tumultuous 12 months, around the world and here in Rockland County. Our backyard was not immune to the anti-Semitism and racism we heard about all too frequently across the country and around the globe.

In February, the Anti-Defamation League reported that the number of anti-Semitic incidents in New York jumped by more than 90 percent from 2016 to 2017. A dozen incidents occurred in Rockland County alone.

Knowing this, you can understand why, as Chair of Federation’s Community Relations Council (CRC), no more than a few days at most pass without a conversation with a law enforcement leader, government official, representative of a religious or civil rights group, civic organization, educator or all of them about an act of vandalism or hate or online rhetoric. Sometimes it is not for any of those reasons.  As the public affairs arm of the Rockland Federation, the CRC represents our Jewish community’s interests and concerns to public officials, the media and community at large.

This year we met with all of the Rockland school superintendents to work toward a common goal of educating children, their families and neighbors about tolerance and diversity. We partnered with the Holocaust Museum & Center for Tolerance and Education, which is assisting various public schools and districts in their efforts to provide educational resources and classroom strategies to address the current environment. But despite this outreach, the incidents continue.

Anti-Semitism is a hatred that many, if not all of us, have had to deal with throughout our lives. My parents, both Holocaust survivors, told me to make sure we “never forget” but I feel our country and the world are letting my parents down. What is different now is that anti-Semitism has become more openly expressed, no longer in the shadows or talked about in low voices. It is blatant. It is horrific. It is scary. It is not going away unless we speak out and take an active role in condemning it.

During the Passover/Easter holiday in March, a young adult left a bag holding a doll’s head with a Swastika and the words “You’re next” scrawled across it on a front porch in New City. Video captured the incident and the suspect was identified. He apologized to the homeowner, who was not Jewish but was greatly upset. We spoke with the police and elected officials and we spoke publicly about the need to continue educating our young people and their families about respecting others.

In December of 2017 I appeared before the county legislature on behalf of the CRC. I urged the legislators to vote for the proposed anti-BDS (Boycott Divest and Sanction) resolution and show their support for Israel. The resolution was passed.

CRC members constantly monitor social media and blogs for misleading, defamatory and inflammatory posts. We have seen “Jew Haters” trending on Twitter and online comments including “Jews are not part of the American system” and “I am so sick of this Jewish cult!” When we read these despicable messages or are alerted to their publication, we reach out to the author or the blog’s editor to make sure they understand the hate they are espousing. Sometimes we respond online and in other instances we request removal of the objectionable post.

When Rockland Community College ended its 20-year practice of cancelling classes for the Jewish High Holy days, the council acted. We reached out to RCC’s president and requested that the college reconsider its decision. We spoke with our beneficiary agency Hillel, county legislators and students, who opposed the change and were worried they would miss too many classes. We are very appreciative that our collective concerns were heard as RCC has agreed to not hold classes on the first day of Rosh Hashanah and Yom Kippur this fall. This issue has further demonstrated the importance of building relationships which makes solving the inevitable problems much easier to do.

On the issue of education, there is a major matter yet to be resolved – educational equivalency standards. The council has taken a stand that all children should receive an education that meets the standards established by the state of New York. This was the law until a last-minute budget amendment in April. We believe all students should be prepared to be productive members of the world in which they live and education is the key to achieving that.

Earlier this year, Orangetown officials proposed an ordinance to prevent installations on telephone poles. The object of this ordinance was to block placement of eruvs. We met with government leaders and urged residents to attend meetings when votes on the issue were scheduled. We are monitoring the status of this proposal and are in contact with the town supervisor, who says the board is waiting for a legal interpretation before deciding how to proceed.

The members of Federation’s CRC are in constant contact, discussing ways to respond to these different episodes. But questions always remain. Why is this happening? How do we bring an end to it?  We share what we have done and how we are working to encourage dialogue. We realize that in order to succeed, the participation of Rockland’s diverse populations is needed. If all groups contribute and join in, we’ll achieve the tolerance and ongoing communication needed to bring our full Rockland community together.